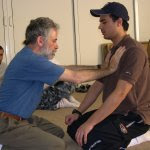 I’m currently living in the Columbus Center for Movement Studies, studying Being In Movement® mindbody training (BIM) intensively with its founder Paul Linden. Bing In Movement is body awareness training that can be applied to areas as diverse as business, computer-use, abuse recovery, sports performance and interpersonal communication. Here’s what I love about Being In Movement:

It’s logical and testable – Paul Linden rigorously defines terms, avoiding fuzzy new-age clichés like “energy” and “consciousness”, and often says, “let’s see…” in response to questions. He then devises a suitable experiment to test if for example, relaxing the abdominal muscles leads to improved concentration.

It respects experience and choice – Paul Linden’s teaching method is to let people discover bodily experiences for themselves, and if they find something different from the norm then that’s interesting rather than wrong. He also uses an explicit “safety contract” whereby participants give there consent before any exercise (as well as calibrate its intensity) – this sounds obvious as a basis for interpersonal respect, but observe for a day how often we don’t use this rule in everyday life and you’ll see why its special to do this as a matter of course.

It can be used in intense one-on-one work and also with large groups. Paul does hands on bodywork which is deeply personal and usually experienced as both down-to-earth and profound. In addition he can instruct large groups, guiding for example, 1000 office workers through the rudiments of pain-free computer posture.

It’s the “goodies” from Aikido without the exercise, martial and cultural aspects which keep many people from the arts benefits. Aikido was Paul Linden’s main laboratory for developing BIM.

It can help anyone do almost anything better – I am aware this is quite a claim and know that the BIM principals are so universal that they can be (in fact have been) successfully applied to almost anything. Paul suggested to me that it might not work with psychopaths but I think he just hasn’t tried this group yet.

It has an embedded ethical content so can’t be misused. The nature of Being In Movement means that’s good. Again I know this is quite a claim so I’ll explain. One very radical thing that Being In Movement proves is that power and love (I sometimes use the terms effectiveness and kindness) are the same thing – two sides of one coin. I get that this may sound crazy as it goes against a lot of cultural conditioning and taught concepts. Some of the aikidoka out there may know what I’m getting at having experienced the power of relaxation and graceful ethical movement….

It is an objective critique of political/social norms. BIM shows how manipulations of the body by social rules, clothes and furniture have often surprising implications. Let’s take the example of women being taught by society to sit with their knees together, further enforced by short skirts. Paul demonstrates with a couple of gentle nudges how this posture is one of powerlessness and ill-health, suitable only for victims. After training in BIM neck-ties now seem more like nooses and laptops look designed to make me depressed! Even chairs seem sinister now.

It’s rapidly learnable – both by clients/patients/participants and to teach. Because of Paul’s insistence on logic, clear terms and experiential learning, people can pick up the core of BIM very quickly. A person already bodily aware (e.g. a martial arts teacher) can easily pick up the fundamental techniques and essence of BIM on a weekend course. Skill in his hands-on bodywork approach takes time to develop as it requires great sensitivity.

It’s Fun! I’ve yet to see anyone not enjoy and learn from a Being In Movement class. Despite being personally challenging BIM is enjoyable. Paul teaches with a lot of humor and I laugh during every session.

Paul Linden holds a 6th degree black-belt in Aikido (under Yamada Shihan, USAF), is a certified Feldenkrais teacher and has a PhD in physical education. In addition he is an excellent children’s Aikido teacher and an all-round Mr. nice-guy.

I first met Paul in Cyprus while assistant manager of Aiki Extension’s peace-building project “Training Across Borders.” Paul’s powerful trauma recovery work caught my eye and later I experienced firsthand the efficacy of his one-on-one bodywork while dealing with the fallout from a friend’s death. My home dojo Renshinkan in the West Midlands hosted his first UK visit in February ‘07.

Paul is a hero for his abuse recovery and peace-building work (as testified by thousands of grateful clients), and an under appreciated genius in general. In my considered, researched opinion only Richard Strozzi Heckler has been as successful as in extracting Aikido’s deepest principles for use by non martial artists. I hope Paul’s work continues to spread and benefit more people. It’s already taking off in Germany, Argentina and Poland. I look forward to employing aspects of his work with corporate and gyms groups in the UK. Most of Paul’s work is accessible enough to be learnt from his excellent e-books available here and soon to be released video clips.

When I first met him and didn’t know he was ill, and he gave me the impression of a gentle man with a fire raging in his hair. I later learnt that Paul has Parkinson’s disease. To me this gives him an intensity and lack of tolerance for bullshit and cruelty. Get what you can from him while you can, he wont be teaching forever.