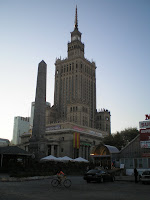 I’ve recently returned from a trip to Poland training Being in Movement with Paul Linden Sensei.

Paul Linden is a senior member of Aiki Extensions, director of the Columbus Center for Movement Studies , founder of Being In Movement® and in my opinion one of the best body-mind teachers in the world. He has spent a lifetime applying principles from aikido, Feldenkrais and other arts to a wide variety of areas, especially abuse recovery, conflict resolution and sports.

As ever I found his wo rk in Poland accessible, humane, and powerful. I was particularly struck by Paul’s teaching method, which is to ask people to experience and e 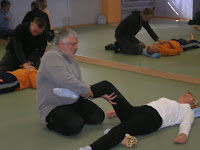 valuate for themselves, first a habit and then an alternative. This seems to really get to people and overcomes “yes but…” resistance.

The Polish group was about half martial artists and half others, including psychotherapists, dancers and NLP teachers. We worked with Paul’s tool-bag of relaxation, breath, intention, power, love and yielding and had an intense and enjoyable time. I’m now looking forward to spending a month with Paul in Ohio shortly, as his work seems very relevant to my own.

Our Polish host was Przemyslaw (pro. “Shem’eck”) Gawronski kindly he put me up in his Warsaw aikido school, which like all dojos was a home from home for me. Paul Linden also led Przemyslaw’s “Integration Class” – for parents and childre 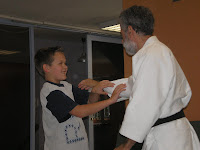 n to practice aikido together. His “Samurai Patty Cake” game was a winner.

After the seminar I traveled to historic Krakow. This Polish cultural and educational centre felt like a Harry Potter set at times and I met plenty of friendly people there. My hosts in Krakow were Pawel and Pawel , trainers from Aiki Management, recommended to me by Lance Giroux of The Samurai Game. I also joined in their aikido class, it was interesting to work with Polish bodies which have a unique feel. The Pawels were live in students of Tissier Sensei, an exceptional Fre 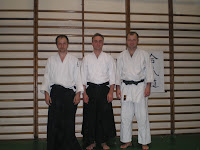 nch aikidoka, and it showed in their fluid movement and Powerful technique. 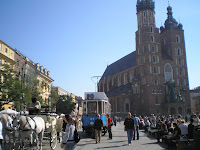