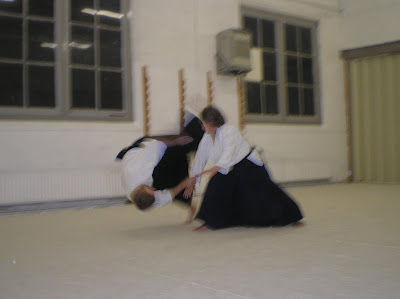 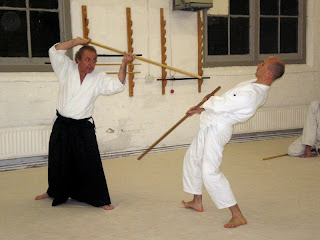 I’ve been visiting Renshinkan Martial Arts Centre – HQ of the United Kingdom Aikikai. RSK is one of the few full-time aikido dojos in the country and has two 6 dans, five 5 dans and a bunch of other senior grades teaching there, at least three classes a day. Over a few years I lived there on and off between seasonal jobs and travels, taking tuition off the late great William Smith Shihan MBE. Mr Smith’s emphasis on solid traditional aikido, correct etiquette and personal kindness is alive and well. Since I was last ther 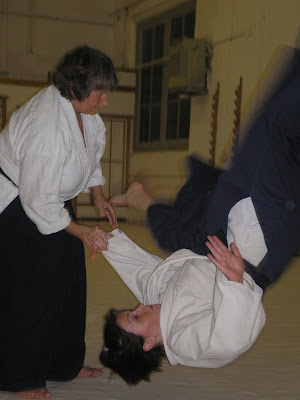 e for the UK Aiki Extensions bonanza in February, the kids class has really picked up. Unexpectedly I was asked to teach the children and had a lot of fun. Aside from techniques I shared co-operative, movement and centring games. My new BIG RED FOAM BAT OF SCARY WHACKEY DEATH seemed to be enjoyed too. Many of the games were from or also used by Jose Bueno of Brazil, Paul Linden and Michael Fridel (both US). I’m happy that Renshinkan is thriving under the direction of Gordon Jones Shihan and will keep coming back. Pictured: Mike Smith Sensei, Piotr Strozick (uke with jo stick), Patrica Narey Sensei, Sam Jones (uke).

During my three-day visit I stayed with my old uchi deshi (inside door) mate “Polish Pete.” I really enjoyed seeing him again and we both agreed that the time being battered, having no money, no washing or cooking facilities, not being able to speak each other’s language, in the cold converted chapel of Renshinkan was a lifetime highpoint. I left splattered in his and my blood, sweat and tears due to an accident…ah, just like the good old days J Pete also took some photos of a Integration Training trial at Birmingham Chamber of Commerce…more soon.
Tweet Pin It