Two years ago I spent ten weeks living at Richard Strozzi-Heckler’s ranch (Strozzi Institute), studying in his leadership dojo, doing aikido and bodywork classes. The time I spent there was an intense personally transformative feast of learning. I also had a number of experiences there that verge on the mystical, which I won’t repeat online lest I be taken for a drug-addled hippy.

At the end of my stay at Richard’s a close friend committed suicide and a few days after the funeral I lead the first large Aiki Extensions gathering in the UK. Enough to say what I learnt at The Leadership Dojo was crucial at this time. Since then the work has proved useful countless times, and lifesaving at least twice. When I say that Richard’s stuff works, I know, I’ve tested it in a number of hostile environments. 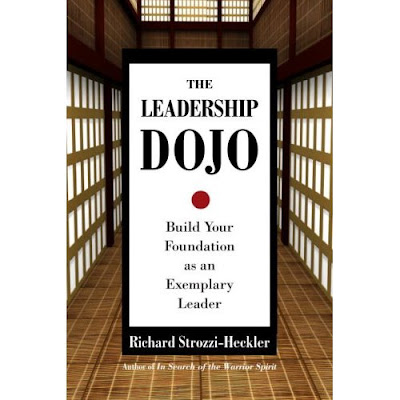 Richard Strozzi-Heckler is known by many for his work teaching meditation and aikido to US Special Forces – described in the entertaining and thoughtful, “In Search of the Warrior Spirit.” In addition to holding a 6th degree black belt in aikido and dan grades in four other martial arts, he has studied bodywork with some of the worlds greats (e.g. Ida Rolf, Moshe Feldenkrais, Randolph Stone) and linguistics with Chilean philosopher Fernando Flores. In the last 15 years he has worked extensively with corporate groups, and his latest book concerns this work.

In Richard’s way of thinking we are all leaders, and a “dojo” can be anywhere – it is not a concept limited to martial arts. Richard’s central approach is “Somatics” – the study if the living body in its wholeness. Somatics views the body as far more than a machine, being a place of awareness, mood, dignity, learning, change and communication. Personally, I describe somatics as that which “Makes you different from a chair.” Integrated with the bodily approach is linguistics. Viewing words as “speech acts” can make life much more manageable. I’ve found his approach especially useful to any type of organisation. An example: When we make a request (a type of speech act) people respond in one of four ways: Accept, decline, commit-to-commit or counter offer. So when go example, putting together a seminar by inviting teachers, they may say, “Yes”, “No”, ”I’ll tell you later” (at which point I’d establish when) or “No, but I’ll come to the next one.” “Maybe” or a lack of response is only ever one of these four responses in another guise. Establishing clarity about which response you are getting is very useful and saves a whole lot of bother!

The frustration I have with this blog and books by somaticians I’ve come into contact with is that talking about lived experience is “dancing about architecture” to steal a phrase. That being said I would still highly recommend this book as a clear introduction to somatics to anyone, and a master-class for those involved in a body-art already. Richard writes eloquently on how we’re always practicing, how our Self is the constant that effects all that we do and how it is changeable through practice in a dojo. He takes concepts that aikidoka will be familiar with such as centering, extending, blending and entering, and makes them accessible and highly useful to the rest of us. Reading this book I thought back on the times I saw executives in heels learning from an aikido staff form, businessmen transform in front of my eyes and how learning how to spot an untrustworthy body or how to make linguistic “commitments” altered my own life.

Buy this book. If you can’t afford it, take it easy but take it. Then get another couple for your loved ones.

Richard Strozzi-Heckler will likely visit the UK next year – watch this space.