Martial artists are not normal people.

There is relatively little information on the psychology (i.e. madness) of martial arts, surprising as many claim to be character building as “do” (paths), and as I mentioned, MAs are full of nutters. For my psychology degree dissertation some years ago I surveyed all the literature then available on martial arts madness (since then Martial Arts Madness” by Glenn Morris, a senior practitioner of Ninjitsu. His book discusses some common problems martial artists have: “ New Black-Belt Syndrome (arrogant and mean),”Master as Sex Stud” and the “Dangerous Human” syndrome (I have to register my belly button as a lethal weapon) to name a few. Anyone who’s been in martial arts for a while will smile in recognition at some of the characters irreverently described. Dr Morris then goes on to discuss some of the more esoteric aspects of martial arts such as chi, meditation, developing intuition, “psi energy” and even astral projection.

Glen is clearly has done his research on martial arts madness, with both his head and body. He is also funny and a good storyteller. As a “how to” book of esoteric techniques I wouldn’t recommend it, but then I find it hard to imagine a book that I would…there is after all the usual disclaimer about getter a proper teacher. The aspect of the book I found annoying was the numerous letters included from the author’s friends and students saying how amazing he is. Also, as a book, the chapters came across as a mish-mash not a coherent whole. In places it was also a little too kooky for me, but who knows, weird shit does happen. 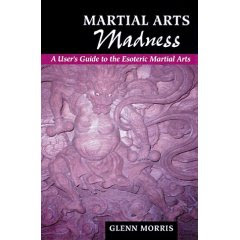 There is a respected Ninjitsu practitioner just down the road I’ve known for a few years in the same tradition as Glen Morris. I’d been meaning to look him up in order to get some sensitivity exercises for Holistics, after I had rape-defence training fun with a Berlin ninja, so this has given me the added impetus. Assuming I’m not engulfed by a dragon being ridden by princess shrouded in green mist…I’ll blog it.

Oh and just for a laugh…