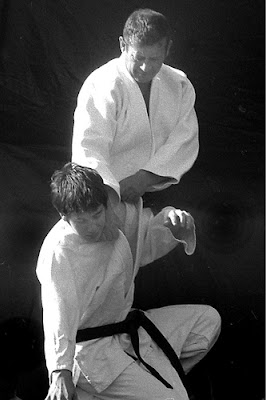 In the UK when grading for an aikido black belt you write a black belt essay as well as doing a practical test.

The black belt essay should have been easy for Mr Bloggy Pants you might guess, however as it turned out I had two days to do it – and it was no small task to express something that’s been a big part of my life for ten years. In the end I went back to a the theme that I’d done my psychology dissertation on – “The Meaning of Aikido in Practitioners Lives” or “Why On Earth Do We Bother?”

Interestingly as the exam approached and now after, I’ve become somewhat disillusioned with my practice and am reexamining my motives for training. I seem not to be getting what I once did on the mat, or am perhaps just finding it more readily elsewhere. Anyway, here’s the essay:
……………………………………………………………………

I estimate that I’ve invested the same number of hours in aikido that it would take to become fluent in a foreign language, capable with a musical instrument or gain a PhD. I’ve also spent the amount of money it would take to buy a decent car or a round the world cruise, in ten year of mat-fees, travel expenses, summer camps, etc. This is not atypical. So the question is why do I or anyone else study aikido? Have I been wasting my time or was it a good investment?

I first started thinking about this question seriously while writing a dissertation on the psychology of aikido seven years ago. Here are some of the reasons people give for studying aikido.

Aikido is a martial art. In my lineage at least, aikido is a practical means of self –defence. This is the foundation upon which everything else rests. The curious thing is that aikido is a non-violent and harmonious martial art which presents many challenges. There are quicker ways of learning how to beat people up effectively, and the very notion of “aiki” suggests a non-fighting as a fighting strategy.

On the one hand the single instance that we may need to use aikido to defined ourselves or loved ones form violence is worth all the hours of training. Those who are not prepared for the harsh realities of the world will regret it. I’ve “used aikido” in the most direct practical sense while living and working in dangerous locations, and some people such as policemen and bouncers may use it quite often this way. For most of us however, this is a rare unfortunate incident, and if it’s happening often perhaps we need to look at our lifestyles, attitude or common sense. To see aikido only from the point of view of combat readiness is also to miss out the last character in the word – “do.” The founder of aikido added this element to aiki-jujitsu, meaning aiki techniques. All of the founders writings as well as interviews with his students attest to the fact that he saw aikido as much more than just a set of tricks. One of my own teachers, the late Shihan William Smith said to me on his first experience of aikido and why he started, “It was more what the man said than what was being done, “Harmony, way of life, no hatred, no revenge, no jealously, no lying”, which I liked.”

I’d now like to move on to some of the other benefits of aikido that may motivate us to train even if we are never going to be attacked.

Aikido is good for you. O’Sensei removed many of the harmful techniques of aiki-jujitsu and focused on those which stretched the body in natural directions. As well as good aerobic exercise the emphasis on posture, touch and breath can make aikido exceptionally good for one’s health. I say “can” as it depends on the spirit in which it is practiced. It has been my observation that while most aikidoka get injured, their general levels of health are much better than in the population as a whole, and when they miss training they soon feel the difference. The rolling and locks of aikidoka act as a massage if techniques are executed smoothly and taking ukemi builds dynamic strength through the whole body.

Psychologically aikido relieves stress and builds confidence (I’ve seen this many times with children). On a deeper level the role-taking nature of the uke–nage relationship brings up themes of trust, power and vulnerability, and this may be crucial. Other aspects of the art can also be said to be character building such as the emphasis on discipline and etiquette. If nothing else aikido teaches you how to handle pain!

The benefits to health and behaviour of a long term aikido project I was involved with in the slums of Brazil, were obvious to one local youth charity worker, “I used to think aikido was nice, now I see that it’s as essential as food and education for these children.”

One thing I like about aikido is the people it puts me in contact with. Through aikido one gets to interact with people from all races, religion, nationalities and occupations, and have a common language to do so. Aikido dojos tend to be supportive communities and many of my best friends are now aikidoka. One particular joy of aikido to me is the fact that it puts people of different ages together. As I have approached shodan I have been mentored by older men, and had young people learn from me. The second doshu talked of two way exchange and learning between the generations*, and this has been my experience.

Perhaps even more useful than the techniques of aikido are the principles and practices. By practices I mean such things as breathing exercises and posture which can be applied in daily life. I regularly use belly breathing and centring when nervous or angry for example. By principles I mean such things as non-resistance. By learning to “go with the flow” and blend with the “attacks” that happen each day, life becomes easier and more enjoyable. I now teach aiki based training to businessmen who would never step in a dojo for a living, so aikido has given me this gift as well.

I’ve seen aikido itself used in youth work and peace building projects. Sports, theatre and other activities can also be used in this way, aikido however has several features like it’s non-competitive roll-taking nature that which make it exceptionally effective for such work.

Ultimately one never really knows why one does aikido, which is the answer my first teacher gave me when I asked why he continued to train. What is clear to me is that I’ve not been wasting my time as I have gained innumerable riches from this odd art, and hope I will continue to do so. The benefits of aikido are not something ones achieves, but things one gets repeatedly through continued study. A black belt is just a milestone that one has looked at certain things deeply enough to want to continue to do so. 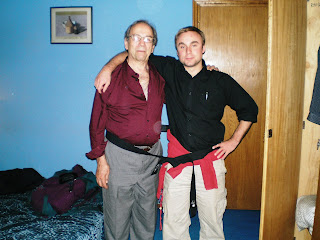 As well as these explicit reasons to train I suspect there a set of psychological needs being met that really motivate aikidoka. They are rarely openly discussed, but show up daily and it rings true to most aikidoka that there is more going on that’s being spoken about.

Many of these needs centre around power and can have healthy or twisted expressions. We all want to feel safe and perhaps protect or be dominant over others, whether we admit it or not. The other side of this is that we find security in giving up our power to authority and find tranquility in the predictable order and rules of the dojo. The surrender of ukemi is a pleasure related to this, giving up our small self for the power of nature. The pathologies of aikido are also related to power, appearing as abuse, politics and ego.

Another need that is rarely mentioned explicitly, though we often use the word, is connection. As social animals this need is a very basic and both the touch and intensity of aikido can provide something missing in modern life. Aikido also brings up many Jungian archetypes that we love to explore – warrior, sage, magician and innocent all crop up on the mat, where extroverted extension and introverted sensitivity can be bought into balance. To me, the single most revealing question is is our practice motivated by fear or love? Perhaps it’s enough just to say we’re all nuts and get back to training, however it’s also of value to examine why we’re training from time to time, lest we sink into aimless ritual and habit. I guess that’s where I’m at now.

The picture above is of Donald Levine Sensei, Aiki Extensions President giving me his black belt while on the road in the Middle East. If hope to find reasons to continue wearing it that do justice to the wider picture of aikido he nurtured in me.