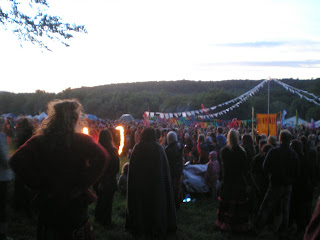 What happens when 5000 Buddhists get together in a field in Devon for five days of practice and celebration? The Buddhafield festival is what.

I’ve just come back dirty and happy and highly recommend it. There was a huge amount on offer at the festival including Dharma talks, workshops, music, yoga and dance. Highlights for me included Jewels’ tantric “Sacred Intimacy” workshops and ecstatic dance, morning tai chi with Brighton friend Dharmakara and Contact Improvisation. I also enjoyed Breton dance, Indian classical dance, voice workshops, various rituals and consumed my body weight in raw chocolate and herbal tea. I attended quite a few sessions lead by a cheeky chappy named Jayaraja, including adult games (LOTS of fun), Non-Violent Communication and a talk on 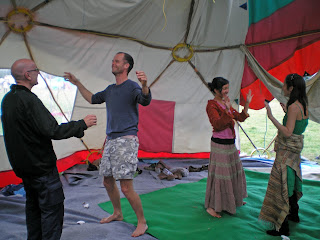 On the last day of the Buddhafield Festival I lead a session on embodied peacebuilding which was well received and a session for the teenagers there called “chill games” (both pictured), using much of the same material.

The organisation of the whole festival was impressive, particularly the effort that went into ritual, adornment and a sense of care for people there. Rather than any of the individual activities, perhaps the thing I most enjoyed was being a in a mindful community where commitments to awareness, self-development, the environment etc, were the norm. The almost total lack of drugs, alcohol and crime was also very refreshing. 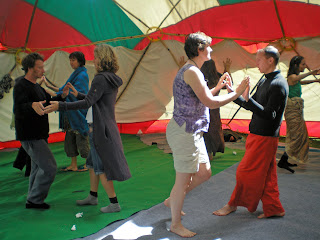 Niggles for me might included water shortages and the amount of superstition I came across…as Mr Wilber says, pre and post rational can get confused and I value rigour, questioning, authenticity and thorough research. If I don’t hear the word “energy” for a month that would be fine 🙂

While the Buddhafield Festival is explicitly about Buddhism (FWBO particularly but with many groups represented) paganism was also clearly at play. The mix of the two was sometimes quite odd, and while naked dread-locked mud smeared ravers bounced and writhed to techno, I wondered what the buddhas adorning the dance tent might think of it – I suspect they’d be a tad confused bu 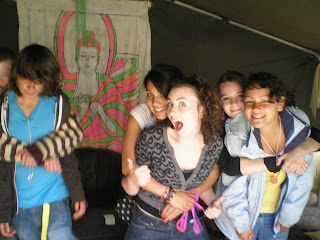 t wouldn’t nomind. Questions for me arrose as to how much of the healing and personal development work on offer was really effective, and whether it was spiritually or ego enhancing? I don’t know.

All things considered though I had a lovely time and will be going back next year. Thanks to the organisers for their tireless work in making it happen and giving so many people a wonderful experience.