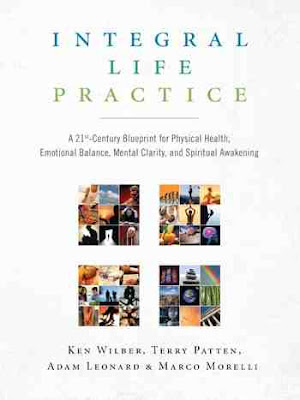 If you like or want to be good at everything – Integral Life Practice for you. Here’s my book review.

OK, so we can’t be really good at everything, but we can develop a good overall view of our present situation and develop some practices to improve it. “Integral Life Practice – A 21st Century Blueprint for Physical Health, Emotional Balance , Mental Clarity and Spiritual Awakening” is a new book by Mr Wilber’s gang and the most complete answer I’ve seen to the question of how to develop in a balanced way. As the book’s title suggest, an emphasis is placed on long-term practice in diverse realms. I met Terry Patten, one of the authors of Integral Life Practice in London a little while back and liked the guy.

First off I’d like to acknowledge Integral Life Practice’s predecessor – George Leonard’s Integral Transformative Practice at this point. This was followed by the Integral Institute’s own ILP starter kit, by many accounts an overprized box of balls. The invention of ILP aimed to make the Integral world less about geeks who couldn’t get laid and just talked quadrangledmetachartevolutionofconciousness theory and more about people actually doing something to improve matters, so this book is long overdue if the Integral species is to breed let alone evolve. Now I don’t want to be too hard to the Integral Institute as I LOVE their theory of everything. It has changed my life over the last two years profoundly and I use it as the central model for my business and life (one thing). The book contains one of the clearest most assessable descriptions of integral theory I have come across and does a concise job of explaining how human history, consciousness, biology, psychology, spirituality, God, and other little things like that fit together. For that alone I’d recommend it.

ILP has four core modules – body, mind, spirit and shadow (subconscious). The strengths of Ken and Co. show up in these with mind and spirit being absolute crackers, and body and shadow slightly less so. Where mind and spirit really shine and body and shadow are merely quite good, is the comprehensiveness of the research that went into them. Reading the bios of the authors it seems clear that they have studied spirituality and theory in depth, but less so embodied practices or therapy – as a bodymind trainer with a background in martial arts, somatics and psychology I’m bound to be a little picky here though 🙂

While I love the 3,2,1 Gestalt influenced depth psychology recommended, I wonder if this really came out of a comprehensive review of psychological traditions or whether Gestalt was simply the most available to those working in the human potential movement? Where are Jung’s archetypes for example or the work of the British neo-Freudians?

Now onto the body module. This is probably the part where my views count for something as I work through the body and have had some depth of training in this area. On the whole it’s not bad, but again displays certain biases. For example the authors emphasis on strength training. While there is research showing how pumping iron can have positive effects on health, aging etc, I wonder how up-to-date the data in the book mentioned is? Does it simply represent Ken’s love of lifting and US cultures obsession with power and appearance? Most research on exercise indicates that regular aerobic exercise is the kind that keeps you healthy – don’t trust me, ask your doctor. In terms of the more subtle forms mentioned I would like to have seen a bit more on yoga given its popularity and as a martial artist and dancer I was unimpressed by the little on these wonderful practices presented, though I was happy there was a “neuromuscular” section at all.

The question re strength training brings up for a wider question of how evidence based the book is. Now obviously it’s wonderfully leading-edge and therefore relatively untested, which is both worrying and exciting. I suspect that versions 2 and 3 that will hopefully appear in the upcoming years will be much improved if a wider range of voices are listened to and scientific evidence examined closely lest Ken’s word be taken as gospel or in Ken’s own words – a “pre/trans” fallacy occur and ILP become superstitious not post conventional.

The spirit module rigorous defines spirit, discusses spirituality at different altitudes of development (I found this clarifying) and is packed with practices from various traditions and useful advice “Do it” and “keep doing it” being my favourites. Like all the modules I do not believe that many of the practices could be learnt from the book without some kind of support structure – though community and teachers are discussed explicitly several times in the book.
As for the book itself I really liked it’s easy to use form, with short chapter, boxes and pictures – a little colour would have been nice but I get that this raises the price tag. Some of the language was a little Californian/Coloradoan for my cynical English ears, take the last words,
“Now you are finally free to be the Freedom [Star and Stripes anyone?] you’ve been from the beginning [vomit]. “Just this” [err…what?] is the ultimate reward [will I get laid?] that comes from inhabiting the particular cartoon character you drew from the Kosmic [where’s my crystal…] deck of cards.”
Ok, piss taking aside – and I’m 17.5% less piss-takey than many of my second tier British friends who would really be turned off by this language – a shame as the work itself would really benefit them. Maybe I’ll offer to translate it into English for II…

To finish on a positive note, one thing I really like about the book is that it draws out some good general rules of practice. Now I had to learn this stuff the hard when I started aikido for example and nearly quit many times. This kind of conversation simply wasn’t happening ten years ago and I’m really happy that Integral offers a broader picture and way of moving on from the old dichotomies.

I see a core challenge of my generation is integration – hence the name of my blog and business – how does the mess of science, culture and religion we’ve inherited fit together and how can we fit ourselves together? This book is damn good start – recommended.
………………………………………………

Integral So What: Growth takes intelligently aimed hard work. Read the best textbook on it yet written.