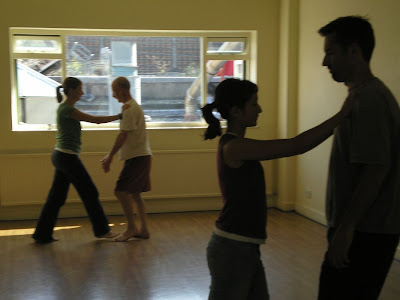 What does the body have to do with team building?

Traditionally a lot of team building exercises, like the kind I led in outdoor education for some years, involve close touch, movement and physical contact – helping people get through hoops, untying “human-knots”, giant walking planks, lifting stuff, getting across assault courses (the army like this one), etc. Most of us have done this kind of team building, some of it was fun and some of worked. So what is it about physical activities that involve touch, coordinated movement and physical proximity – that brings people together? Well, this is the basic way human being build trust and coordinate as a group. This is why in every culture in the world has dancing is a part of courtship and marriage rituals, and also why armies use marching and drilling. When people really have to get on –to raise children or fight a war the coordinated body movement is used. My favourite combination of dance and warrior coordination is the Maori Hakka – famously used in by the world’s most successful rugby football team – the All Blacks -to build a team sense and intimidate opponents. Other Maori dances were traditionally used in other community activities such as welcoming visitors, typical of many tribal cultures where group movement is an integral part of life. Our hunter-gatherer ancestors lived in intimate proximity with their “team” with life and death at stake, so it is perhaps no surprise that such activities evolved. Coordinating over time through language – also important and part of my work – comes after this basic, primal physical communication.

So how does this apply to office life today? Does traditional physical team building hold the answer? Yes and no. This type of work is usually enjoyable and can be a great way to reveal people’s characters, however does the team feeling generated last and transfer back to regular office life? Sadly often not. One necessity that is missing in this type of team building is reoccurring practices, as real change and learning takes sustained effort over time. Just like learning a language, musical instrument or sport, practice is key, even if this is a pill the modern world doesn’t want to swallow, with our industry perpetuating the myth of quick results that last. Malcolm Gladwell has recently picked up on this. Now, modern office workers are unlikely to start dancing a Hakka together, and touch is a scary issue in the modern law-suit laden world – so what are the practices that they can do?
Here’s some cheap, time-efficient team building tips: 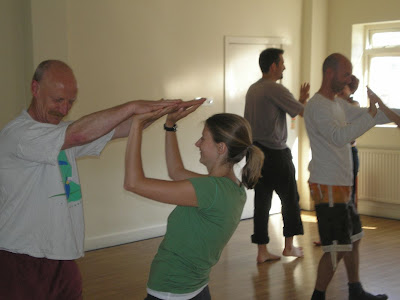 Don’t trust me on any of these team building tips, try them and see for yourself – they are all low financial and time costs. In the modern world of geographically distributed virtual teams much natural team building disappears and I would suggest there are some hidden costs to this way of working in terms of efficiency, morale and team spirit. One new-media CEO I know here in Brighton England says that programmers working on a project are several times more prod

uctive when sat next to each other than when in separate rooms. This supports the evidence gathered by studies such as those reported in Daniel Goleman’s Emotional Intelligence in the Workplace, showing that cohesive teams are several times more efficient than groups who don’t get on.
The case for team building is persuasive, especially when times are tough and productivity matters, and an understanding of the body is necessary for effective team building.
………………………..
Business So What: team building happens through bodies
Tweet Pin It