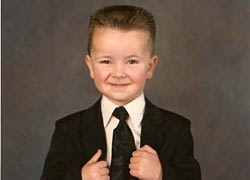 I hear a lot about ageism against older people at work today, and that’s fair enough, no one should be mistreated because of their age. What I don’t hear much about but experience on a weekly bases is ageism against young people at work (reverse ageism). Ageism is one of the last socially acceptable forms of prejudice, and ageism against young people the side of it that rarely gets addressed. For a good example of something that would never be allowed in regard to race or gender see “Shed experience, hire young fools” from the Times.

In the training industry in which I work age is sometimes equated with “life-experience” – some kind of magic quality that makes people with beards better trainers apparently. Now I’m not saying that one can’t accumulate skills or even wisdom as one ages, I’m saying this doesn’t necessarily happen. For every person that ages like wine, there’s another that ages like vinegar.
Experience can equate to being stuck in ones ways and out-dated, youth can equate to being dynamic, creative and open – but neither necessarily.
Age is often not a good measure of experience in a fast moving world based on specialism, and if there is such a thing as “life experience” (as opposed to specific skills and multiple intelligences) I’d claim that it was measured in love and loss and not years. Also, each generation tends to build on the one before so what was a great achievement for my parents generation (e.g. racial equality) is just a given for my generation. As my aikido instructor put it – “You should be better than me, you’ve got me teaching you!” In fact aikido is a good example of a skill that takes time to develop (ten years to black belt is typical), but that you can begin at almost any age meaning there is some but not far from total correlation between age and skill. There are also skills within aikido that young people are much better at and gifts which complete beginners bring which “the experienced” are blind too. I would claim that many modern workplace skills are event less age related than traditional arts like aikido due to the pace of change.

When I asked a representative of DWP (the government body responsible for such issues) about ageism against the young at a conference this year – I was greeted with a somewhat confused look and the comment “We normally concentrate on older people.” Happily they followed-up by e-mail with some good resources -and I recommend contacting them if this is an issue for you. One of their papers concluded:

“The research findings show evidence of ageism against younger people in the workplace. The group discussions produced fairly widespread anecdotal evidence of younger people experiencing some form of discriminatory treatment because of their age.”

So where does ageism against the young at work come from? Fear of the unknown, fear of change, clinging onto power, arrogance? I don’t know – what I would claim is this – if you need to mention how long it’s been since your parents happened to get jiggy with it to justify something – maybe it’s time for some other qualifications. How is being asked how old I am in a professional context where it’s not relavent different from asking if I’m gay or Jewish? I’ll happily tell you my age, sexuality and ethnicity if you’re just curious, but if you’re asking so you can jump to some stupid assumptions you better just take a jump full stop.

Anyway, I’m 30 next month so I guess I can start complaining about the other side of the coin 🙂

Ageism So What: It ain’t about how long you’ve been here, it’s about what you’ve done and what you’re going to do here.