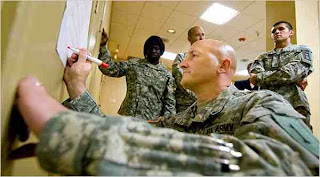 This article in the NY Times on “emotional resilience” and stress reduction (PTSD/suicide reduction) reports on how the US armed forces are taking stress management seriously. I hope the UK armed forces become as forward thinking…I’d love to work with them and think the embodied approach to stress training that I use would be more accepted by your average solider than the CBT influenced one reported here. I also have it on good authority that the Australian army are trialing physical stress reduction techniques similar to the ones that I teach.
………………..
“The training, the first of its kind in the military, is meant to improve performance in combat and head off the mental health problems, including depression, post-traumatic stress disorder and suicide, that plague about one-fifth of troops returning from Afghanistan and Iraq.”

Stress So What: Soldiers can suffer less with stress reduction
Tweet Pin It