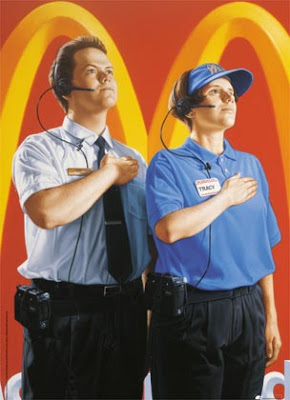 Here’s part of a diaglogue along in a fast food restaurant along with what went through my head (in blue) and what I actually said.

“How can I help”
Your face looks like you would rather do anything other than help…
“Just the cheeseburger meal please mate.”

“Do you want to go large?”
Stop trying to upsell, clearly I don’t need to.
“No thanks”

“Have a nice nice day sir.”
You don’t mean that. You’re full of BS, and when did I get knighted?
“Cheers”

Maybe I was having an off day, maybe I am just tired of inauthentic exchanges with supposedly well trained staff. Like most people I have these kind of dialogues daily, sometimes I try and bring reality into into it by saying what’s on my mind (usually in a more polite way than above) but this usually just freaks staff out.

In many companies customer service training is the opposite of authentic communication and it in NO WAY makes up for staff who don’t want to be there because they hate their jobs.. It always shows when people hate their work and have contempt for customers, as so much communication is non-verbal. People who are trained to say one thing but mean another are leaking the truth anyway through their body language. Inauthentic communication alienates and frustrates all involved.

On a more positive note, I’ve had an entirely different experience at the Apple store in Brighton. Also a large corporate chain but one where employees seem to genuinely love their product and are allowed to be themselves. I have chatted to several staff their and have been met by no stock lines or general plastic BS. Their (some might say cultish) loyalty and genuine desire to help is somewhat disconcerting in a world where it is so far from the norm in fact.

Clearly there are several factors at play here and I’m not comparing like with like. I would however say that training that stresses authentic communication over scripts is essential for businesses. (Quick plug for moi while I think about it: BS free communication training in Brighton, London, Birmingham and the SE.)

Lastly, I’ll finish by saying that culture is a big part of this – British people in general value authenticity and humour, and training that has been imported from the USA wholesale isn’t appropriate. The manager at the Brighton Apple store is American, but the feel of the staff interaction is very British (very Brighton in fact). Let’s end fake plastic crap communication and get back to being human and British. In the words of a great British statesman – “Keep it real”.