Intregal Transformative Practice is what it says it is. Developed by aikido teacher George Leonard it consists of regular practice of a “kata” – based largely on aikido exercises, yoga, meditation and deep relaxation techniques – affirmations, imagery work and commitments to areas of life such as exercise and diet. Intregal Transformative Practice group members commit to long term practice to reach their full potential. Leonard’s view is that “normal” is in fact subnormal – well below our potential functioning. Leonard has written a number of books, is an ex fighter pilot, ex Esquire editor, once ran a dojo with one of my teachers – Richard Strozzi Heckler (and Wendy Palmer) and is the creator of the Samurai Game. 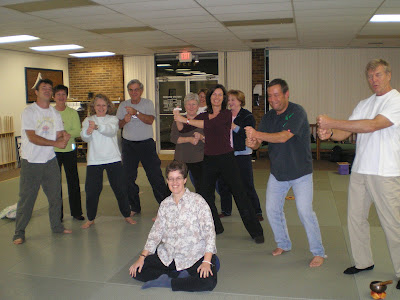 I recently visited an Intregal Transformative Practice practice group housed by the Columbus Aikikai, Ohio. I was made to feel very welcome and enjoyed the experience. The kata was well rounded holistic exercise and not dissimilar to the set of exercises I practice each morning which forms the foundation of my gym and corporate work. As someone who has studied Aikido movements in-depth, I was slightly concerned that they were not adequately understood or taught with the rigor I’m used to. I suspect a yoga instructor would say something similar about the sun salutation that was part of the Intregal Transformative Practicekata. That being said what was done was clearly healthy and the ITP is explicitly not regular Aikido, so maybe I’m just being an aikisnob.

What I really like about Intregal Transformative Practice is its emphasis on two things: community and dedicated long term practice. Both of these things are often missing from modern life and both are IMO essential to the success of any endeavor, particularly transformative mind-body studies. Community (sangha in the Buddhist tradition I believe) is fundamental to the success of churches, dojos and 12 step recovery groups…By the Way, BIG cheer to Alcoholics Anonyms founder Bill W, while I’m in his home State!

Practice is what we’re often told isn’t necessary by quick fix, magic pill gurus, however the VAST majority, if not all successes in areas as diverse as sports, music and social arenas, come about through investment in long term conscious practice. To paraphrase Aikido’s Ezra Shihan: “The secret is to keep coming.”

Visiting the group was a Tibetan Lama, who was helping with the meditation part of the kata (guest experts are a feature of ITP groups). Aside form really clear practical advice on meditation technique, Kathy’s humor was also a great joy, with Ken Wilber’s Youtube videos and captain Kirk being mentioned. She had the uncanny ability to listen to a students issues, cut straight to the heart of their problem and offer a uniquely suited piece of relevant advice. Perhaps the biggest compliment I can give her, is that after toying with the idea for a few years I’ve taken up a regular sitting practice. I can hear all my Buddhist friends out there quietly OMMing in celebration…rest assured you can keep your lentil burgers I will still eat your pet kittens given half the chance.

I recommend ITP to those who can get to a group and am seriously considering inviting an ITP teacher to the UK in the future.