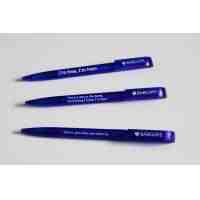 What is the connection between Taoism and business?

As a child I remember my Dad storing the TV remote down the side of the armchair where other people would loose it. I was recently reminded of the simplicity of this “going with the flow” approach while in Barclays Bank as I saw a sign encouraging people to take their pens. Banks have long had the problem of disappearing pens but rather than the traditional approach of chaining them down or putting “No Stealing” signs up – Barclays are using it as an opportunity to demonstrate their generosity and get some cheap advertising – smart.

I mention these two examples as given the current climate I think what the represent can be very useful. The art of going with the flow is exemplified in the Chinese philosophy of Taoism (pro. “dow-ism”) – sometime called the water-course way – you’ve all seen the yin-yang symbol. There is a kind of efficency to a certain kind of laziness and an action in non-action (wu wei in Chinese) which at first makes no sense to the busy executive but might after they realize they can’t possibly do the jobs of their sacked colleagues as well as their own. Taoism is really the study of the flow of nature – right now we are moving from economic autumn to winter and that’s not the end of the world – things change. The other central Taoist tenant of simplicity (pu) may also be useful when times are tough. Perhaps the time of over-consumption and ostentation is over – and that might not be a bad thing. 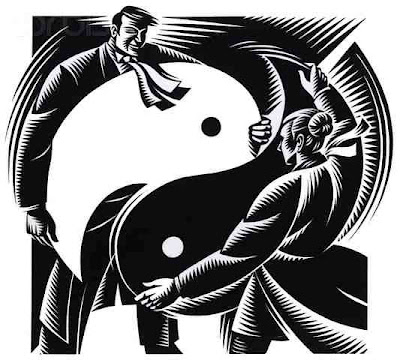 Now back to the pens. The Buddhists have a concept of “dana” which basically means generosity. From the Buddhist point of view because we are all interconnected it makes a lot of sense to give as things come back to you. “You have to give it away to keep it” is how 12-Step programs refer to it which are sustained by dana the world over. Dana is an entirely different economic model from the one we regard as common-sense and is tried and tested having been in use by Buddhists for 2500 years and for Western 12-Steppers for around 80 years. In business terms living in this way encourages me to give away my services to build relationships before I receive back -and I might not is the rub, especially if that’s what motivates me. Given this, generosity can take a certain courage especially when you’re down to your last pound. The examples of nearly every success in the Internet age are however encouraging – Hotmail, Google, Amazon – all are generous – Seth 101).

My trains from Brighton to London are now regularly delayed from people jumping onto the tracks. The tube-line that runs through the main political and financial districts in London has added special suicide prevention barriers. OR, we can change our way of think to one more in harmony with life’s ups and downs, giving and taking.

So What: Get lazy, get simple, get generous.