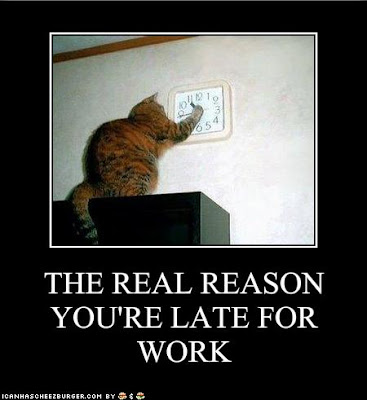 How many times are you planning on being late this week? How many times will you be? I’ve been asking myself for a few years – why are people late (myself occasionally included). It’s a personal bug of mine as like many business people my time is precious and I know life is short. Most people hold the view that being late is rude – and while there are wide cultural differences around this (as my Brazilian ex will tell you…) – it is at least in Northern European and US culture regarded as disrespectful. Why then are people late?

The two most obvious explanations are that people are late because they are stupid or don’t care. Let’s take don’t care first.
People are late because they don’t care
First, it’s worth differentiating sincerity from reliability. I have a number of friends who really believe they will be on time but rarely are – they are unreliable but not consciously insincere when they make time bound promises. Liars are not the same as flakes. In between are people who don’t respect other people’s time (hell, it’s only their life). If you care about the person you are meeting take responsibility and make sure you are on time as it.
People are late because they’re stupid
I had a close friend at University who was always late. She was an A grade student but was “late-stupid.” This used to frustrate me as at the time I didn’t understand what the problem was -she cared, was clever but was reliably unreliable. It’s not really intelligence but other cognitive factors at play
Attention
Most people do not have a trained attention so they easily forget what they are doing and get drawn into other things. People are generally not good at holding multiple commitments in mind.
Reminder Systems
The human brain is bad at recalling information (e..g I have a meeting) at specific times, it works by association rather than like a clock. This means we need reliable reminder systems which can be high (a Blackberry) or low tech (a washing basket placed in front of the door)
Optimism, Memory and Mental Modelling
In order to be on time you have to remember past instances of going somewhere and/or model how long things will take. Some people are habitually optimistic in doing this – often failing to account for what I call “corridor time” – the time it takes to get shoes on, go to the toilet etc, between actual activities. In this way being late is a modelling issue.
Emotional Issues
Often people who are late often get an emotional pay-off for doing so – attention from others, the excitement of rushing, even getting to beat themselves up internally. Unless these are resolved time management systems won’t be effective.
People are Late Because of Acts of God?
Late people usually blame external circumstances – traffic, weather, their own children, whatever. This removes blame and accountability. Notice however there is a continuum between “I was hit by lightening” and “I bumped into a friend and we had to have a coffee” (a real one from Brazil 😉 Take for example when it snowed recently – I was running a time management workshop in London and didn’t want to be late/cancel! I looked at the weather the day before, travelled up from Brighton the night before heavy snow was forecast, stayed at a friends near the venue and walked in the next day. Some in the workshop went to even greater, most didn’t and were late/ didn’t show.
Some people see themselves as victims of circumstance and others don’t, what is really different is their mind-set and their commitment, and it pisses me off when people don’t own that as it damages the relationship, the work and their own power.
What about flexibility you may be asking -yes, that’s important too, but another article 🙂 In the meantime here are my top tips for how not to be late:
How Not to Be Late
– Take 100% responsibility for being on time, all the time, under ALL circumstances
– Use past experience as a guide then add some extra time (20% is good)
– Have a plan B
– Meditate to train your attention
– Get reliable reminder systems (e.g. a phone that beeps at you)
– Take account of “corridor time”
– Look at the emotional pay-offs involved for you
– Don’t ruin an apology with an explanation if you are late
Tweet Pin It